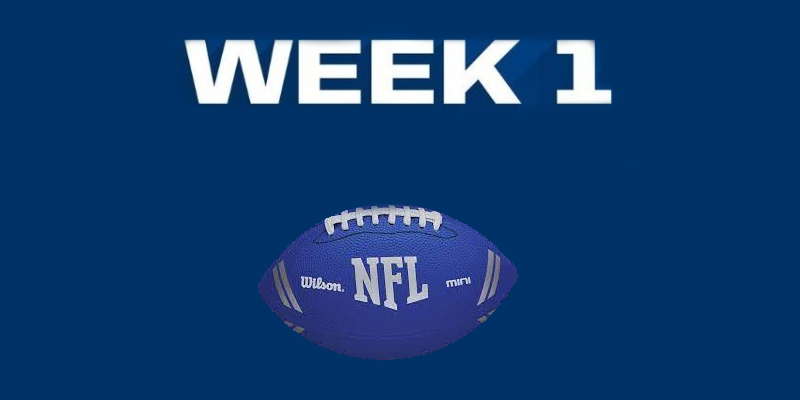 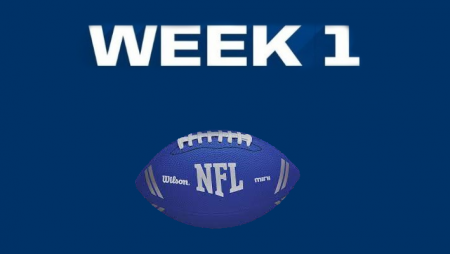 This week marks the start of an event nearly every sports fan has been waiting for months – the football games are back! Today we will take a look at the betting odds, point spread and money lines on all of the first week NFL games.

For the betting numbers we have used the latest odds published by two of the most popular online sportsbooks: Bookmaker and Bovada Sports. We will usually use one of them for each game, but note when there are big differences between the odds at each of the betting sites. So let’s get right at it and see what the oddsmakers have cooked up for the beginning of football season.

Week 1 of the NFL will commence with the Thursday night matchup between the current Super Bowl champs LA Rams against the Buffalo Bills. And to tell you the truth, we couldn’t have asked fro a better season opener than this game. The Rams will come out heads held high, while the Bills will be stoked to prove they still got it. This will certainly be one of the top games in Week 1 of NFL action.

Even the sportsbooks are having a hard time figuring this one out, expecting a Week 1 battle like no other. At Bookmaker, the Bills are favorite to win outright, the money line on Buffalo at -140, while the Rams will come out on SoFi as +120 underdogs, despite their solid conformance last year, leading up to snatching the Super Bowl title from the Bengals. Bovada Sports is a tad more generous to the Rams, while still being underdogs, only at +115, while the Bills would pay out on a -135 line.

The point spread on the Bills – Rams game is at -2.5 points chalk the Bills, pretty much across all the sportsbooks online. But we have to say that looking at the payout on the spread, there is a good chance that the point spread may drop down to -2 as the game nears this week, at least at some of the sportsbooks.

A tough game for the Jets, despite being at home for their NFL Week 1 opener. A lot of questions will be answered about quarterback Zach Wilson, most importantly, will he be fit to start against the Ravens, after his injury during pre-season. That decision is still up in the air at press time, and will likely remain a question mark until Wednesday.

No question about Lamar Jackson, so it’s hardly a surprise that the Baltimore Ravens are the favorite this week. The line on the Ravens is -315 to win, while the NY Jets would pay out on +260 if they manage to deliver an upset. What we find a bit surprising is that Baltimore is only -7 against the spread in this game. I guess the books are expecting the Ravens to be in no hurry pilling up the points on Sunday.

The mess at Cleveland is certainly affecting the way the sportsbooks are approaching their first football game of the season. Deshaun Watson will remain suspended until Dec. 4th so the Browns had to go with Jacoby Brissett, backed by Joshua Dobbs. Of course, some of the focus will be on Amari Cooper to see how the receiver will work out at Cleveland, after his departure from the Cowboys. But honestly, all eyes will be on the Panthers QB Baker Mayfield in his first game against his former team. We don’t have to tell you that sparks will be flying this Sunday in Carolina.

So what are the bookmakers’ predictions for the Browns – Panthers game? Well, according to the sportsbooks, Baker Mayfield will get his revenge on Sunday. The Panthers are on the board with -140 line to win their first game of the 2022-23 season, while the Browns are a small underdog with a +120 money line. The point spread on the Cleveland v Carolina game is -2.5 points chalk the Panthers.

Despite the god performance the Texans got out of greenhorn quarterback Davis Mills last season, Deshaun Watson will certainly be missed in Houston. The Colts are coming out strong this season, both on the offensive and defensive sides, so there is no surprise that the books think Indianapolis has this game in the bag. The Colts will come out on NRG stadium as huge favorites, holding -380 odds to win the game, while the Texans will pay out 3 to 1 at most sportsbooks on upset. The -8 point spread on the game is also the largest one from all the NFL Week 1 games.

The hardest thing for us, and possibly many others, would be the change of the Washington name to the Commanders. Facing the Jacksonville at home, Washington is -160 to win, while the odds on the Jaguars are at +135 on snatching a “W” in their first regular season game. The small -3 spread is more indicative to the lo quality football most pundits expect than an all-out battle between these two teams. The most entertaining thing about this matchup would be the many drinking games that would spurn in these two cities, trying to catch the talking heads calling the Commanders the Washington Football Team.

Are the Patriots back in full force or has Bill Belichick checked out already? In years past, facing the Dolphins would’ve been an automatic ‘W’ for the Pats, but the sportsbooks have little faith in Belichick, Jones & Cie. once again this season. The Patriots will travel to Miami as an underdog with a +140 money line, while the Dolphins will pay on -165, quite the discrepancy and rift in the time-space continuum, if you asked anyone in Boston. The Dolphins are -3 points against the spread and the books expect a low-scoring game with the total set at just 44 points.

Sunday will close with an excellent game, the Bucs traveling to Dallas to face off the Cowboys and we feel that it would definitely be worth it the extra caffeine you’d have to consume the next day at work. It is the toughest Week 1 NFL game for the sportsbooks, evident by the thin point spread.

Tom Brady is back with the Bucs, for now, and Julio Jones is healthy, also for now. The Tampa Bay roster, although on the mature side, will be in tip-top shape and hungry to go after the Super Bowl jewelry, for their first game of the season. How things will look mid-season is anyone’s guess, but for now, the Bucs appear to be a powerful and experienced team.

We also know that Dak Prescott can deliver, but Zeke’s performance on the ground remains hit-or-miss. Have the Cowboys gelled this summer? CeeDee Lamb’s experience will certainly prove helpful to Turpin and Tolbert, but with Gallup out, would that be enough? On the bright side, Vander Esch is back on a 1-year deal an looks motivated.

Still, the sportsbooks are not quite buying what the Cowboys are selling and have the greybeards from Tampa Bay as their favorite this week. The Buccaneers are -125 to win in Dallas, while the Cowboys will be a tiny +105 underdog at home. Though game to call, and we understand the -1 point spread at Bookmaker. You can get a bit more (or less, depending on your bet) at Bovada Sports, where the spread has inched up to -1.5 chalk the Bucs.

Week 1 of NFL will close with the Monday Night Football game between the Denver Broncos and the Seattle Seahawks. In an odds-maker’s mind, there is little doubt of how this game will go down. The betting sites expect both teams to put on a strong defense, but the Broncos will have little trouble overcoming the Seattle bulwark. It’s a clear consensus among the sportsbooks – the Broncos are going back to Denver with a ‘W’ in their pocket.

The current money line is favoring Denver strongly at -250, while bettors on Seattle would get paid on +210 odds, should the Seahawk manage to pull an upset on Monday. The point spread is -6.5 chalk the Broncos, and we don’t see it changing in any meaningful way by the start of he game, barring any unpredictable news, like injuries.