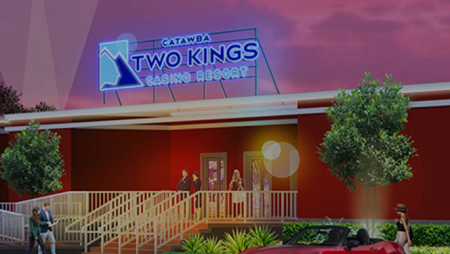 Among the many points included in the National Defense Authorization Act that was signed by President Joe Biden, one more obscure one cleared the way for the Catawba Indian Nation of South Carolina to proceed with their plans to build a casino in neighboring North Carolina.

The casino in question is the “Two Kings Casino” project which has ben in the works for a while now at Kings Mountain in North Carolina, just west of Charlotte. And while the actual casino is still being built, temporary premises have been established with nearly a thousand slot machines available and plenty of gamblers to enjoy them.

A long-standing issue, however, has been the claims others can place on the land on which the casino project is being developed. Most recently, the Catawbas have been challenged by the North Carolina’s Eastern Band of Cherokee Indians, whose lawsuits placed the future of the Two Kings Casino in jeopardy. The Eastern Band of Cherokee Indians already operate two casinos in the western parts of the state.

The U.S. Interior Department agreed in 2020 to put 17 acres for the casino’s location  into trust for the project. And now the National Defense Authorization Act  signed by President Biden, however removed all obscurity around the claims the Catawba Tribe has over the land on which the casino is going to operate. As part of the bill, it affirms that the tribe is subject to the Indian Gaming Regulatory Act. It also recognizes the claim of the Catawba Indian Nation of South Carolina to their ancestral land ties in that North Carolina area.

The finished casino project has an estimated cost of more than $270 million and is expected to create more than 2,500 long-term jobs for the tribe and the surrounding community.

Types of bonuses at the online casinos
2 weeks ago

Gambling revenue on the rise, 2021 could break records
2 weeks ago