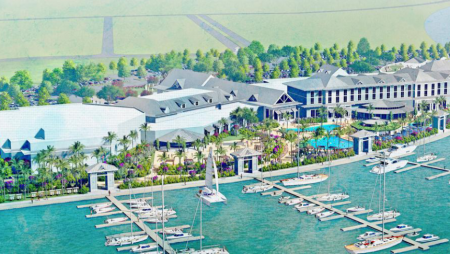 In a blow to proponents of a new casino, the proposal for a casino hotel in Slidell, near New Orleans, LA, failed to garner enough support from the voters.

After spending millions in advertising, California-based Pacific Peninsula Entertainment (P2E), which planned to build the new casino in St. Tammany Parish, will have to look for other avenues if they wish to go ahead with their casino project. Voters in the parish shut down the proposal by a wide margin, 63% voting against the idea of bring in a casino.

Pacific Peninsula Entertainment planned to build this new casino resort by moving its current gambling license from Shreveport, where it operated the now closed DiamondJacks under a riverboat license to the Slidell area near Lake Pontchartrain.

St. Tammany Parish has had a ban on casino gambling in the parish since 1996, and took to the booth this weekend to vote on whether to keep or abolish the long-held ban. The results came in on Sunday, with the majority of the community deciding to keep the casino ban in place.

The casino project, named Camellia Bay, called for a casino hotel, multiple restaurants and over 1,000 long-term jobs created, with a price tag of over $325 million to build and start. P2E had also agreed to share 5% of the gaming revenue directly with the parish. A major point being driven by the bakers of the project was that it would also stop the loss of money and revenue to the Mississippi casinos.

The casino project even saw some high-profile support before the vote, most notably from former Saints quarterback Drew Brees. The athlete was planning to open a restaurant in the casino with celeb-chef John Folse.

None of it was enough to persuade the voters, however. With opposition spending over a million dollars to fight the casino proposal, as reported by some, the casino also gathered resistance from local faith-based groups.